"You cannot step into the same river twice, for other waters are continually flowing on" - Heraclitus 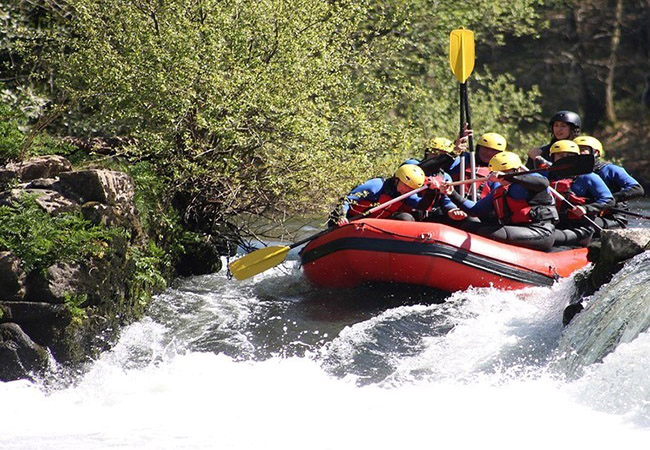 Bumping and rushing through rough river waters as your heart races and adrenaline pumps in your body, river rafting is an extreme sport that channels your inner adventurer – it is an experience that begins with thrill and ends in a sense of overall accomplishment.

Rafting is a sport of cruising through rivers in an inflatable raft. Rafting only requires a bit of courage to fight the rapids in the river but proves to be one of the popular and leisurely done extreme sports. It is challenging, full of risks and most importantly, is based around teamwork.

India is geographically diverse with many easily accessible rivers and surprisingly it is not new in India. India offers several dynamic locations with a beautiful scenic perfect for this extreme sport. Today, many rivers in India have been explored, with some being used commercially as well.

“There is something special about rivers at peak runoff; when the sun comes out and temps warm the snow melt comes crashing down into the valley. Every spring Mother Nature puts on a violent, churning, impressive show that is more addictive than caffeine for river runners.” 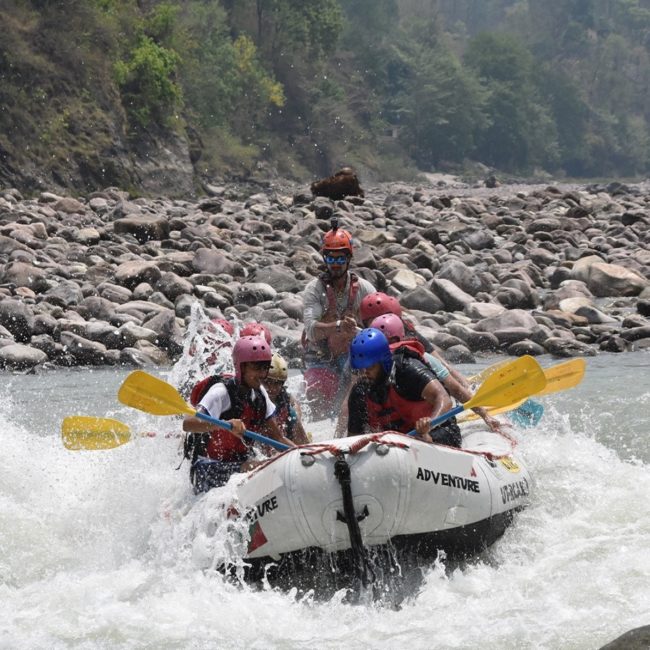 Experience a thrilling rafting adventure with friends and… 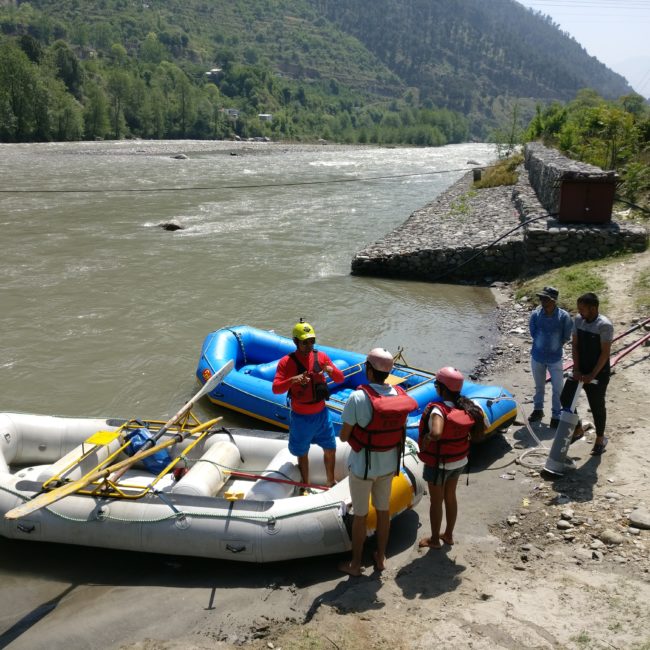 Experience Rafting in the River Beas near Kullu… 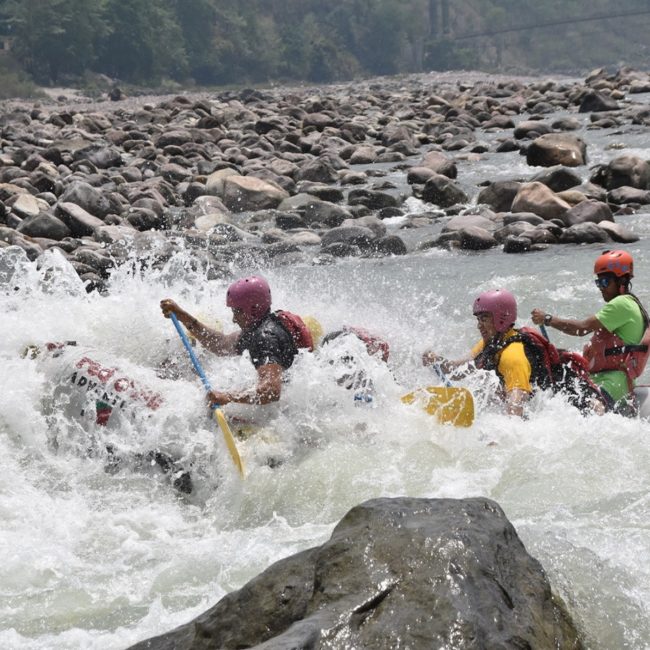 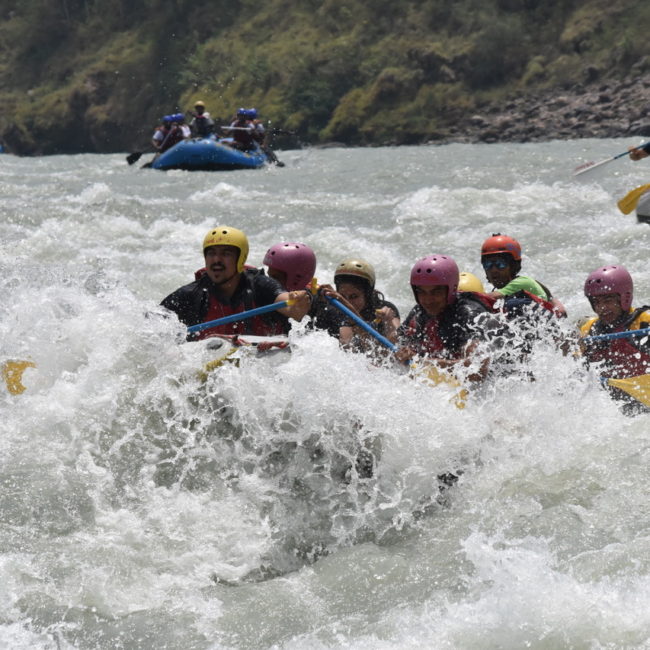 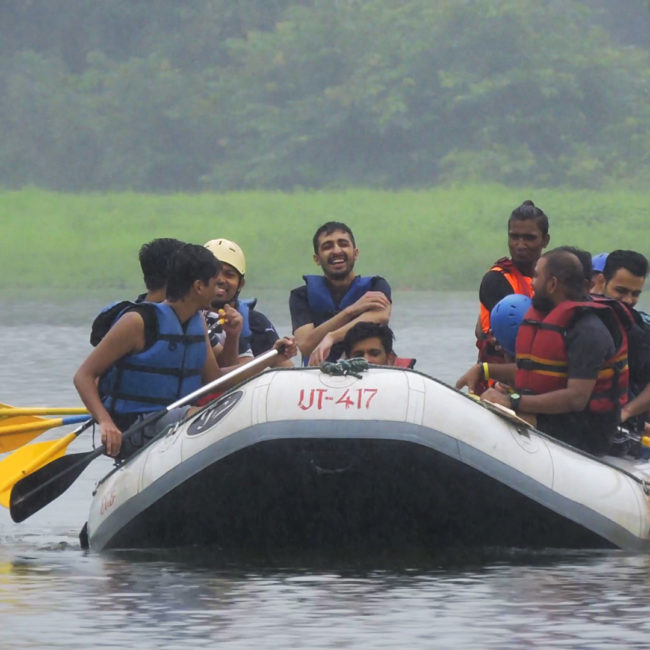 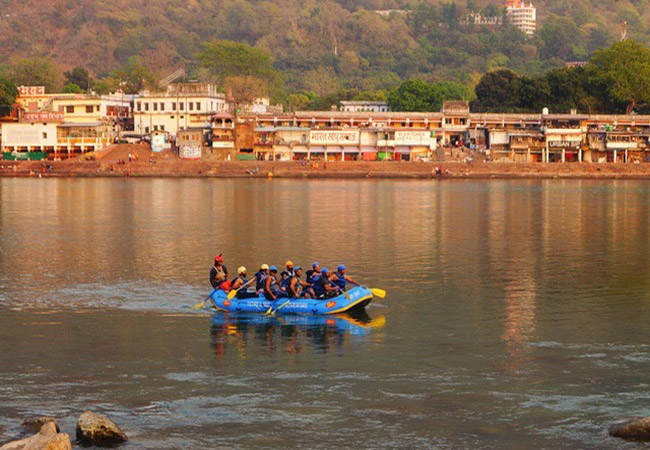 Wherever there is a flowing river, adventure enthusiasts can find themselves a room for rafting and enjoying the river and the sport. River rafting is depended on the challenging rapids. Each river or each part of the country has its own season for indulging in this extreme sport.

Typical seasons for rafting in North India are; June to August in Jammu and Kashmir, September to June in Uttarakhand, March to July in Manali.

In Maharashtra rafting is practiced in monsoon and post-monsoon months.

In South India, the period is from June to September. Thus, India has an array of seasons for those who are keen and love the sport of ‘river bashing’. 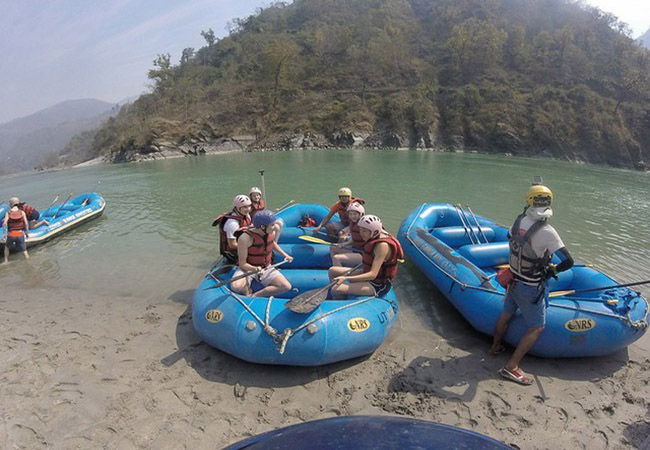 From north to south, there are numerous rivers that are popular for river rafting in India. Some of the best places to raft across the white waters are mentioned below.

River Ganga escalates from the western Himalayas in the Indian state of Uttarakhand and flows south-east towards Bangladesh. River rafting enthusiasts can enjoy fluctuating rapids from grade 1 to 4. Rishikesh, Uttarakhand is one of the best spots for rafting in India and the distance covered while rafting is up to 16 to 36 kilometers. Rafting is better experienced in the months of September to June. 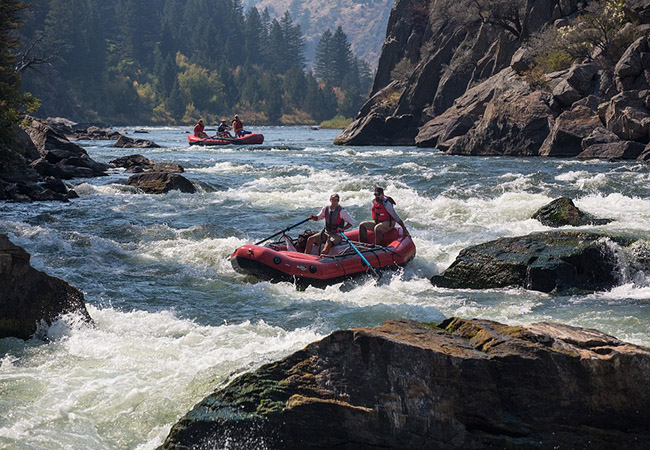 Brahmaputra River in Arunachal Pradesh is one of the important rivers in Asia. It flows from China then cutting the Himalayas passes India entering Bangladesh. Many Indian rafting enthusiasts explore the Brahmaputra River as it is a thrilling rafting spot with the difficulty level ranging from grade 4 to 6. Here, river rafting is practiced in the months of November to March. 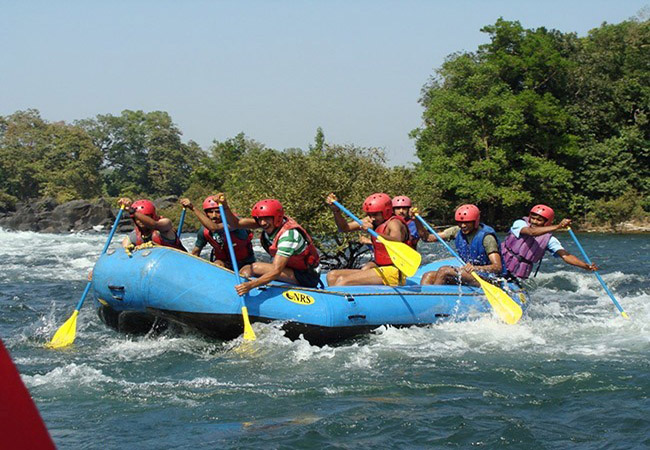 The beautiful Kundalika river flows from the Western Ghats and has its mouth in the Arabian sea. This river is a 74 km long and river rafting is practiced from the villages, Kolad and Korali, which are located at the bank of this river. The level of difficulty is not high and ranges from grade 2 to 3. 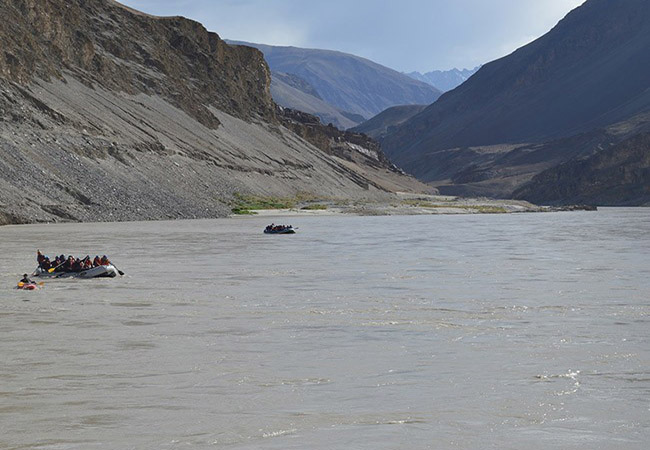 Indus River is one of Asia’s inspiring rivers. It commences from the region of Tibet, then passes through India and reaches Pakistan. It is one of the coldest rivers. Rafting can be done within the 25 kilometers stretch present in India. The difficulty level is marked between grades 3 to 5. The peak time, when one can practice rafting in this magnificent river is from June to August. 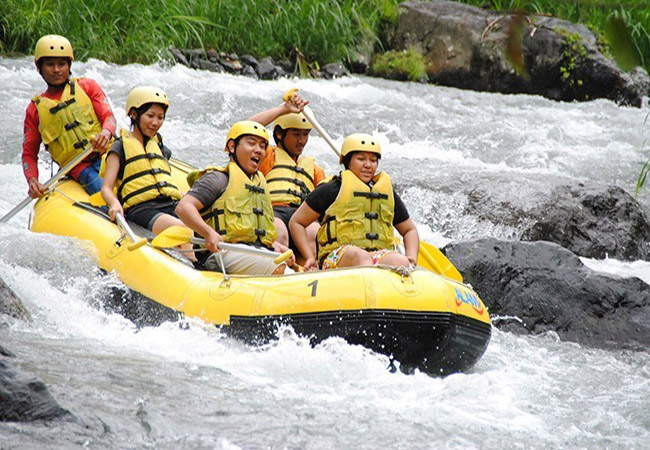 The length of the Teesta River is 309km. Teesta River flows through the state of West Bengal and Sikkim through Bangladesh and ends its journey in the Bay of Bengal. It contains rapids ranging from grade 1 to grade 4. Rafting at this mighty river can cover a distance of 11 to 37 kilometers. The best months to explore this river is from October to April. 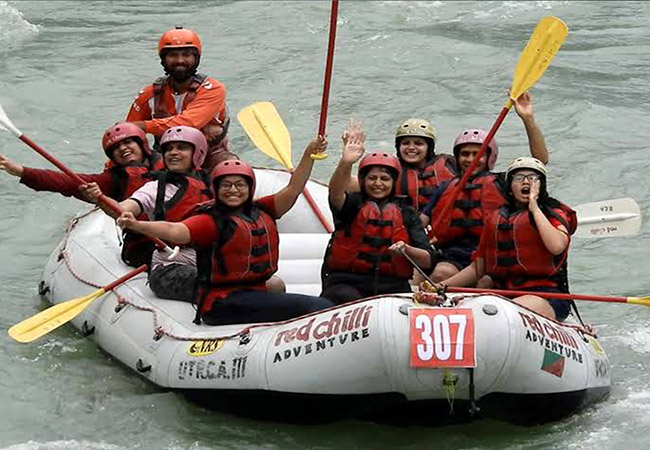 Rafting is one of the oldest means of transportation, where the rivers were used to navigate around inland, transferring food, hunting and shipping people.

In 1811, the first recorded attempt at river rafting was held in the Snake River, Wyoming and in 1840 the first rubber raft was invented by Lt. John Fremont and Horace H. Day. During the same year, the first commercial rafting trip was also held along with a successful scientific exploration of the Snake River led by Clyde Smith.

Slowly, white water rafting companies started emerging from the 1960s and Rafting was included in the Munich Olympic Games in 1972. Now, this sport has established itself as a competitive sport along with being a popular hobby for many.

In India, Uttar Ganga rafting expedition was led by Ken Warren and organized by A.C Kohli, in 1984. It was a long 300 km expedition on Alaknanda, Ganga and Bhagirathi River. Numerous known people showed their devotion and took part in the first pool of Indian River rafting. The active participants were Shaukat Sikand, Yousuf Zaheer, Akshay Kumar, Pawan Sheer Singh, and Ajeet Bajaj. Glen Upperman, an American rafter stayed back after the expedition and trained the first batch of rafters with oar rafting techniques. The same year, two Canadian rafters, Mark Daniel and Ben Webster trained Indian rafters in paddle-rafting. 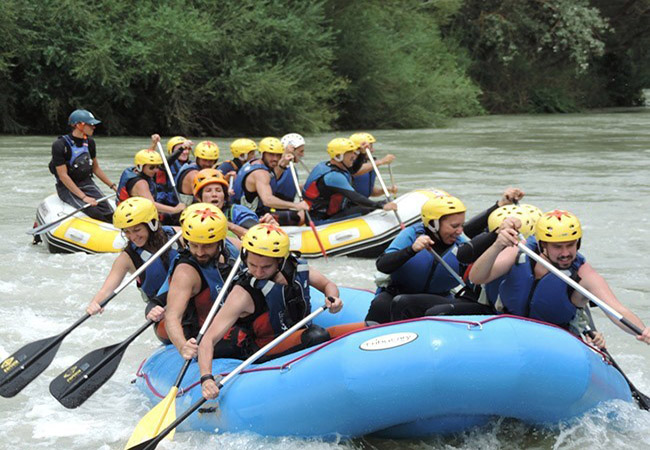 Sprint: As the name suggests, it is the practice of sprinting down the stream head to head with other rafters and competing on who reaches first.

Slalom: In this course, the teams are to navigate around Slalom like turns.

Unfortunately, in India, Rafting is still a recreational activity and has not yet developed into a full-fledged sport.

In river rafting, we require techniques while paddling the boat and manouvering it in any desired direction.

Holding the paddle:
The paddle should be held with both the hand at a certain distance between them, with a good grip. A heavy hand on top of the ‘T’ grip of the paddle will give a good grip for rafting. If you do not have a firm grip then the whirlpools will make it difficult to control the paddle and u can hurt the other enthusiasts sitting beside. To get the proper position for handling the paddle we should hold the paddle with both hands and basket it over the head and maintain a 90-degree position, just like when a cop points out a gun towards us and we raise our hand maintaining the 90-degree position of the hand.

Forward paddle: To move the inflated raft forward you need to put the paddle in the water and pull the paddle backwards. The energy to pull should be released by the upper body muscles and here the heavy grip will help you to put required pressure to pull the paddle. While pulling, you should feel the tension in your hand muscles. And while paddling, if your arms start getting drowsy, remember to paddle with your whole body and not just with your arms. 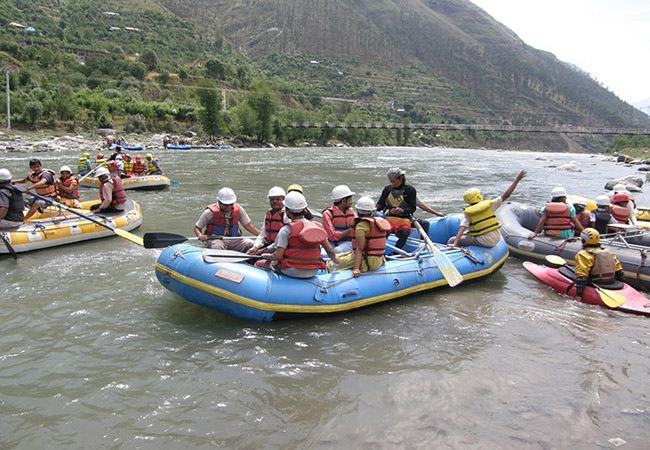 In India national rafting competitions are undertaken to promote rafting as a tourism occupation in the state. This year national level competition was from 10th to 12th April at Rishikesh. There was a selection of 3 national-level teams two for men and one for women. In Maharashtra events of river rafting are held in the village of Kolad which is situated on the banks of Kundalika River. 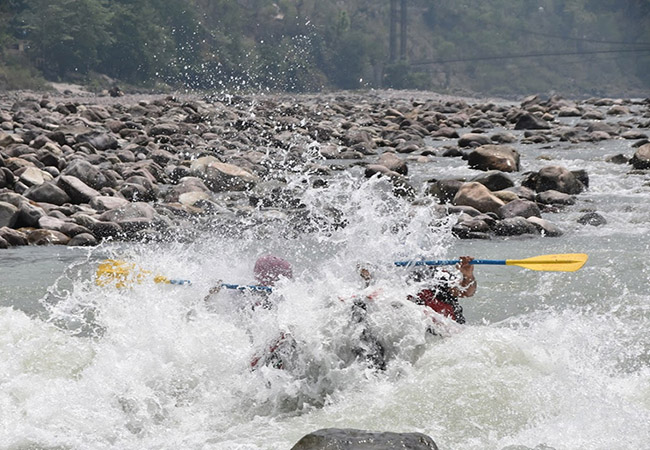 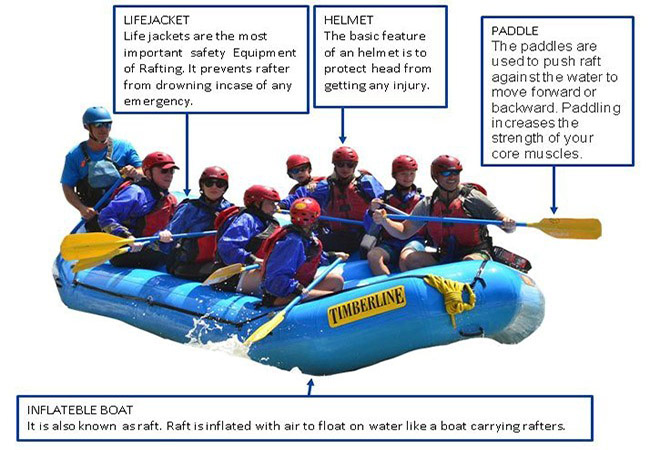 A life jacket is an important gear for any water-based sport as it prevents you from drowning in the water. Life jacket from “FLOATERS” are popularly used all over India as they are designed in such a manner that it fits everybody irrespective of different shapes and sizes. Life jackets are available for rent at every given spot of river rafting in India.

The helmet is nothing but a padded protective hat. It prevents from having head injuries occurring during the course of action. “SAFEHELS” is a well-known provider for rafting helmets among the rafting community. It provides imported quality rafting helmets adhering to international standards. The sizes are customized according to the rafter.

Rafting without a paddle is like having a pen with no ink. A paddle is an important tool for rafting. International rafting fanatics recommend paddles from “UNDER ARMOUR”. They are built by tough carbon material, designed according to international standards. Paddles from “UNDER ARMOUR” give enthusiasts perfect strokes and beautiful feeling while rafting and throws water behind in a sparkling manner.